Eco-friendly, fault tolerant and with local service options. These were some of the requirements specified by pharmaceutical company ConvaTec to the solution that should convert the frequency and voltage of their power grid in Mexico from a US standard to a European. The solution became green, clever and flexible.

Earlier this year, ConvaTec, the global pharmaceutical equipment manufacturer, had to completely renovate their factory in the rapidly growing Mexican city of Reynosa, and faced a complicated challenge. The power grid of the production plant was naturally American and did thereby not fit ConvaTec's European equipment and the production could not get started.

ConvaTec, who have more than 8,000 employees and 11 factories, needed a compound solution that could convert the frequency of their power grid from US 3x480 volts, 60Hz to European 3x400 volts, 50Hz. This meant a number of complex requirements:

The specifications resulted in a complexity that no local company had the capacity to handle. This lead management to locate Schneider Electric Denmark, a global specialist in energy optimization with labour forces available in both Europe and Mexico. According to Ole Søndergaard, Technician at ConvaTec, ConvaTec choce Schneider Electric Denmark, because their solution was able to meet all their requirements.

Henrik Busk Grønning, Partner Account Manager at Schneider Electric, was involved in all collaboration with ConvaTec. According to him, they choce Schneider Electric because they are one of the few manufacturers in the market who are flexible enough to customizesolutions to customers worldwide.

“This one-of-a-kind solution ensures that equipment from Europe can be installed at ConvaTec’s factory in Mexico. It is energy efficient and based on a new conversion technology securing only a 3-4 per cent energy loss as opposed to 10-15 per cent, which is typical for older technologies. Furthermore, this solution is far more reliable than ConvaTec's previous and it can be customized and expanded for future needs. And then it’s also redundant, which means that it can tolerate a fault without it affecting the production," says Henrik Busk Grønning.

"Working with Schneider Electric was terrific and based on mutual respect. We experienced professional service and we are very pleased with the solution. We also tested Schneider Electric's service in Mexico. It works effortlessly and it is a pleasure to experience service abroad that works as promised," says Ole Søndergaard from ConvaTec.

The system will generate surplus in three to four years

ConvaTec's objective of reducing CO2 emissions made the solution more expensive initially, but the investment will be profitable long term as the durability of the machines ensure continous energy savings. This means that the system will generate surplus after only three to four years.

"Many companies use voltage- and frequency converters of older static or rotating models which are expensive to run and bad for the environment. Our goal is to replace these obsolete systems with cheaper and greener solutions," says Henrik Busk Grønning.

Schneider Electric's green Danish solution in Mexico is the first step in a possible collaboration with ConvaTec.

"We are very pleased with Schneider Electric's solution in Mexico and the service that comes with it. Hence, we are in close dialogue with them about the prospect of them installing the same solution at our other factory in Mexico," says Ole Søndergaard. 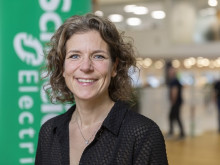 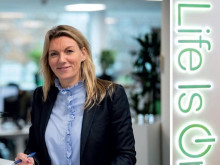